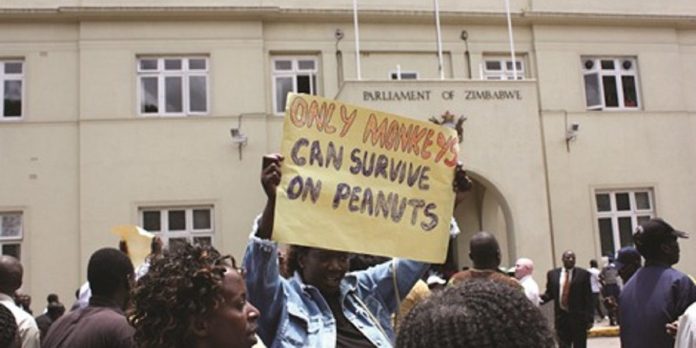 Government workers have declared incapacitation and vowed not to report for duty starting next week.

Last week, government offered its workers a 97 percent salary increment but this was immediately shot down by the Apex Council, which represents civil servants.

The Apex Council is pushing for an equivalent of US$475 for the least paid government employee.

In statement issued Monday, the public workers said they were unable to report for duty as they were incapacitated.

The public workers said government should pay their salaries indexed to the USD dollar and this should be done urgently.

“Government must urgently move to pay USD$475 indexed to the interbank market rate,” read part of the statement.

According to the offer tabled by government last week, the least paid worker was to take home $2 033, a figure rejected by the civil servants representative.

However, Finance and Economic Development minister Mthuli Ncube earlier told journalists at State House on Monday that government was willing to negotiate with the workers.

“We are prioritising them so much and we are keen to see to that we pay a workable wage. So we are in talks with them,” Ncube

The labour movement stated that the demonstration was to push for better wages.