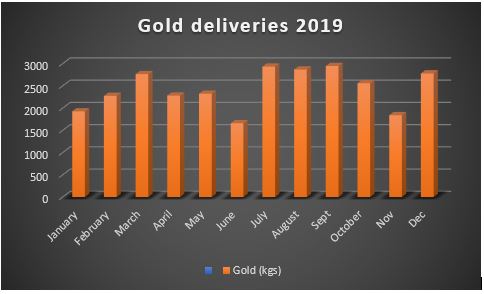 HARARE – (FinX) Gold deliveries in 2019 fell shy of 30 tonnes and were 17% lower than last year. Statistics availed from Fidelity Printers and Refinery show that earnings for the year were at US$1.3 billion from $1.5 billion last year, a drop of 13%, which is below the US$2 billion target.

Gold deliveries were 27.6t against 33.3t mainly due to increased smuggling after the central bank changed the payment model last year to a retention level of 55%. Small scale miners remained the main drivers at 17.4t against primary producers at 10.2t. The deliveries are expected to rise to about 30t if production from secondary producers are added in.

Players within the gold subsector continue to blame the RBZ payment model and delays in processing RTGS payments as the reasons why gold is not being sold through official channels. Irvine Chinyenze, chief executive of the Gold Miners Association of Zimbabwe said there was need for the RBZ to raise the payouts to 80%. However the central bank has always defended the payment model saying that it allows the country to retain money for essential imports such as fuel and medicine.

“The 45% in RTGS is highly devalued and at the current average prices of US$46/g this can only give rise to smuggling. It means small scale miners, who have all along sustained the country’s gold earnings are now earning US$34/g based on current black market rates.” The other major problem is that most of the spares and accessories needed for mining are priced in US dollars.

While Zimbabwe has a long history of gold production stretching several centuries, growth within the subsector has not been sustained. In 2018, gold production beat a record which had been set in 1999 at 33.7t but the country failed to meet the 40t it had set for 2019.

Full production within existing mines has proved elusive because of a lack of capitalisation, high cost of inputs and serious problems with the supply of power and diesel. Outside of the power problems, the sub-sector needs modest investment in plant while in the long term, it needs a radical rethink on the current mining strategy (which is currently being weighed down by political and criminal risk) and a substantial injection of capital to increase.

Zimbabwe’s gold mining is not quite engineered towards large scale mining mainly because of the politics and the narrow vein greenstone belts which would need extensive capital to expand to support large, world class gold mining operations. Analysts believe that mining the veins as the cheapest form of exploration in Zimbabwe even though the geological potential seems to be there. However the skew towards small scale mining is more historical and in recent times more political as the ruling party invited more players into the sub-sector as a form of empowerment.

Historically, the country has a vast number of ancient gold workings which were easy to find, easy to extract quartz veins. The British and the Portuguese before them came to the country and took over where the ancients left out.