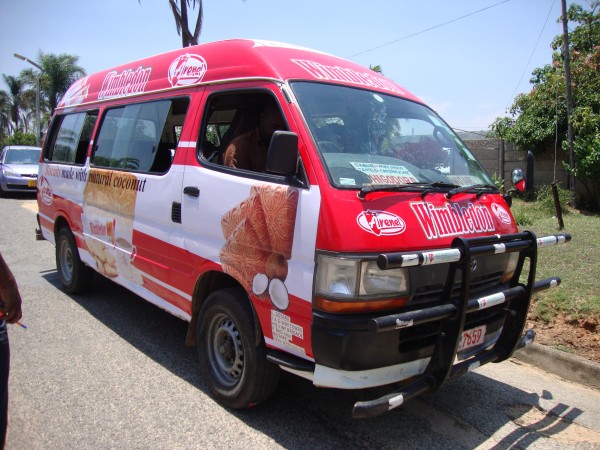 Notoriously known for all manner of vice and immoral behaviour, mini-bus operators are now cashing in on advertisements as the economy bites corporates.

With a depressed purse that cannot allow for conventional marketing, most entities, even those with huge capital, have now gone into mini-buses to sell their products.

Never mind the foul language associated with the rank marshals and at times utterances of unprintable words to customers, business executives are queuing to have their products on commuter omnibuses where market attention is at least guaranteed.

The rank marshals also known as, hwindis, are famous for coining uncultured and unprintable words while popularising them.

But due to shrinking marketing budgets, shrewd business people and companies are now scrambling to post their adverts on kombis, capitalizing on the popularity of the mini-buses.

A survey by The Anchor showed that big companies that include mobile network providers, cigarettes dealers, insurance brokers, money transfer agencies and computer accessories traders are among those scrambling to advertise on the new “billboards” in town, that is, commuter omnibuses.

“I have been approached by three reputable companies who wanted to put their advertising materials on my bus, I had to consider the offer and choose one.

“It was like an auction as the companies were so desperate to advertise on my fleet and at the end I have to consider the one with the best offer,” said Arnold Gube, Harare based transport operator.

Companies are prepared to pay a substantial amount to have their merchandise advertised on commuter omnibuses.

“The price for advertising range from the duration they want and the size of an advert, normally the advert charges range from US$50 to US$200,” said Gube.

Artists have also joined in the bandwagon of being advertised on commuter omnibuses.

Music promoter Alex Penyai said he had found it necessary to advertise on commuter omnibuses because they reach a large target.

“It’s a new phenomenon but its working. A kombi is the most noticed car on the road and people tend to read what is on the commuter omnibus and that way it makes business sense to advertise on it,” said Penyai.

Agatha Mbuyani, Director of Agatha Marketing Solutions said because of the mobility of commuter omnibuses, many companies have realised the importance of advertising on them.

“On the bus or kombi the company’s brand will always on the move, wherever it goes it will carry the message. The distance that the kombi travels will ensure that messages travels the same distance and with the same frequency as the number of times the vehicle plies that route, some omnibuses cross the country’s border and the advert will cross the border too,” she said.

Givemore Kawara a marketing lecturer at a college in Harare said: “Advertising on buses (or on taxis, subways, and trains for that matter) is one way to get your message out to a broad audience repeatedly and on a consistent basis. Unlike other kinds of advertising, like TV or direct mail, people cannot just switch the channel or throw it out. The advert is simply in front of them as a part of the environment.”

“From this standpoint, advertising has the advantage of being able to successfully hit a large number of people without being too costly. When used in conjunction with other media outlets, advertising on buses is an effective way to strengthen your marketing campaign.”

It is relatively cheap to advertise on the commuter omnibus than to erect a billboard.

Many companies have resorted to advertising on commuter omnibuses because their adverts on billboards have in the past faced stiff resistance from local authorities and government.

The Environmental Management Authority has in the past objected to the erection of billboards giving the room for commuter omnibuses to feast on the new revenue stream.

“They disturb the skyline,” EMA director Steady Kangata was once quoted in the media.

He added then “Take the Harare Polytechnic one (corner Prince Edward and Samora Machel Avenue), for example. When standing at Jameson Hotel you can’t see beyond it. It is an impediment!”

He said that when considering environmental impact, authorities do not look at the biophysical environment only but also the impact on the social environment as well.

Roadside billboards are a danger in waiting, especially as presently constituted.

“In the event of an accident, the steel frame can cause fatalities,” he argued.

Kangata related to an example in which before the erection of a gantry, a mishap would result in a car driving straight into a perimeter fence with little consequence.

However, he reasoned, a similar mishap that would see the car ramming into the steel frame of the straddling monster.

“They should be made from collapsible materials which do not pose a danger in case of accidents. It is the norm especially in developed countries,” he said.

Kangata said the erection of billboards is one of the activities that are required by law to carry out Environmental Impact Assessments.