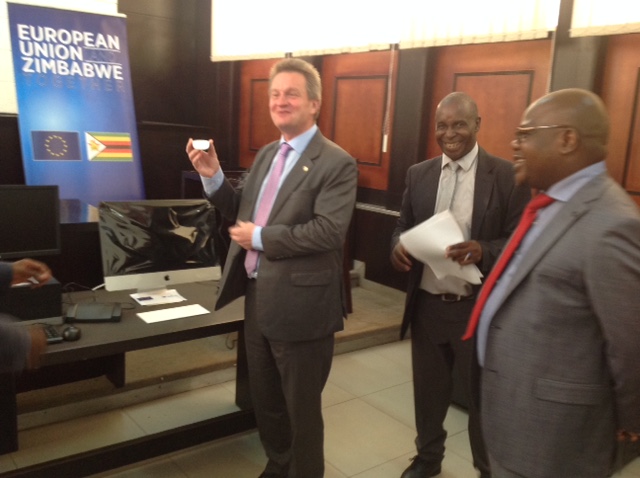 Corruption and none adherence to rule of law are immensely contributing to Zimbabwe’s economic woes, Head of European Delegation to Zimbabwe Timo Olkkonen has said.

He said this at the Harare Magistrates’ Court during the hand-over of recording equipment which will be used in the anti-corruption courts.

“There is no doubt that years and decades of corruption and non-adherence to the rule of law are the causes for the economic challenges Zimbabwe faces today.

“Hence the many efforts by the government and the people in fighting corruption are welcome. One of these efforts brings us here today,” he said.

The EU partnered the International Commission of Jurists to source the equipment which included a recorder, computer and photocopying machine.

“Cooperation between the EU and the Government of Zimbabwe is premised on the full implementation of the constitution.

“The EU notes that government has been slowly and steadily progressing on the alignment of laws to the constitution. We hope that laws related to corruption are reformed in order to complement the fight against corruption,” he said.

Olkkomen said there was no doubt citizens want to see the fruits of the anti-corruption fight as they are the major stakeholders in the fight against corruption.

“I would imagine Zimbabweans want to go to a court, a passport office, a police station or a border post and access services without experiencing and witnessing corruption.

“They would like to see the arrest, prosecution and conviction of corrupt officials in institutions that are well known for corruption,” he said.

Representing the International Commission of Jurists, Dr Justice Mavedzenge echoed Alkkonen’s statements saying they partnered in the project so as to contribute in the strengthening of the rule of law and protection of human rights for all.

He said it was a well-known fact that corruption undermined the rule of law as it impedes access to justice through diversion of public resources for private gain.

“Corruption is a serious impediment to the rule of law and sustainable development. It strikes at the heart of democracy by corroding rule of law, democratic institutions and destroying public trust in government and leaders.

“Fighting corruption is not only crucial for building peaceful, just and inclusive societies, it is also one of the conditions for accelerating progress towards the achievement of all Sustainable Development Goals,” he said.

She hailed the EU and the International Commission for Jurists for supporting government in the justice delivery system over the years.