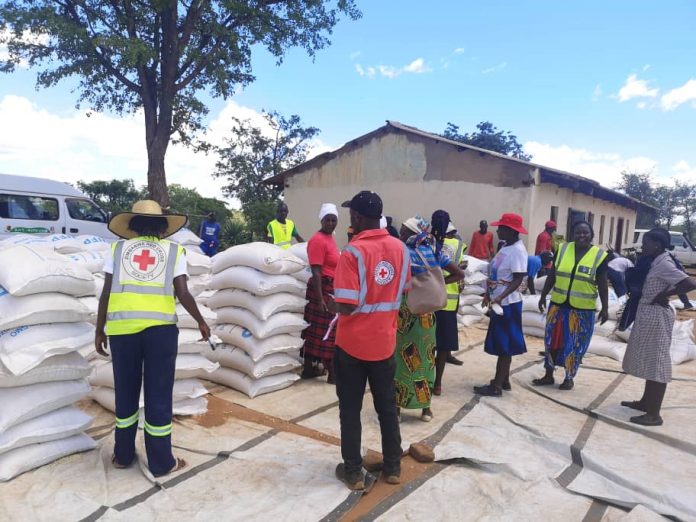 A total of 120 000 people in rural Kwekwe are in need of food aid, with the food insecurity expected to worsen further into the year on the back of an expected poor harvest.

In Ward 7 of Kwekwe District, villagers have, annually, agonized helplessly watching over their lifeless crops while going for years without meaningful harvests. According to Kasawe Bande, even those who have tried small-scale gold mining are succumbing to the effects of the perennial droughts.

“The shafts are as good as empty and panning is no longer sustainable for us and the situation is the same in the fields where the early planted crops have been wiped out by the heat.

For 75-year-old Gogo Letis Moyo her story of double tragedy includes losing her children in a car accident. She only relies on food aid now.

“I tried to plough a small portion of land but there is nothing that came out of it. I cannot go and do mining at my age. We are all but victims of poor rainfall patterns and drought,” she said.

The harsh economic conditions has not spared the villagers biting into their income generating projects.

Mafios Bhera, who lives with disability, has had to abandon his poultry project due to unstable economic conditions bedevilling Zimbabwe.

He cannot keep up with rising prices and exchange rates on the market.

“Poultry is difficult to sustain because rates are going up on a daily bases so we have been affected big time. We are now relying on food aid programmes that are coming this side,” he said.

The Zimbabwe Red Cross Society has since brought huge relief for the villagers while working with World Food Programme (WFP) through their Lean Season Assistance programme.

The four-month programme has had a positive outlook for the villagers who have asked for the programme to be extended until the next farming season.

ZRCS secretary general Maxwell Phiri said they are reaching 58 425 people for Kwekwe District under the programme.

A further 39 932 are benefiting in Makonde District in Mashonaland West with WFP funding the projects under Lean Season Assistance (LSA) – 2019/20 programme.

“The food insecurity prevalence for Makonde is projected to be 50 percent and for Kwekwe it is 64,3 percent for the period January to March 2020 according to reports released in 2019.

“The food insecure population for Makonde is projected to be 81,493 people with the cereal requirement of 12,061 tonnes.

“For Kwekwe the food insecure population is projected to be 119,343 people requiring 17,663 tonnes. Further to this, Makonde District has 26.7 percent of its children with stunting challenges while Kwekwe has 25.4 percent,” he said.

Phiri said numbers of those affected are likely to increase but they will do assessments after harvests to see if the programme can be extended.

Kwekwe District, according to The Zimbabwe Vulnerability Assessment Committee (ZIMVAC 2019), had by May 2019 a 28 percent cattle mortality.

The high cost of inputs and the effects of Fall Army Worm also affected the 2018/2019 season to a greater extend.

The Famine Early Warning Systems Network (FEWSNET) last year noted that the 2018/2019 rainfall season was among the worst on record in the parts of Zimbabwe.

The season was characterized by significant below average rainfall with drought conditions affecting Kwekwe District among other areas in Zimbabwe.