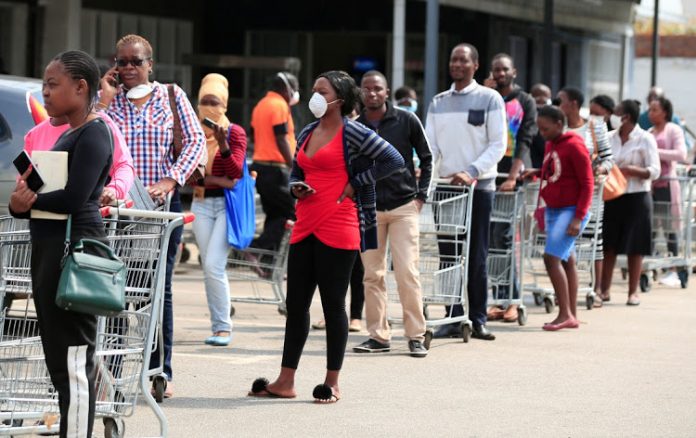 HARARE – The lack of water in Harare has affected government’s total lock-down as people in Glenview, Budiriro and some parts of Glen Norah have had to line at public boreholes to get the precious liquid.

Harare’s taps have been dry for a while now. People are supposed to maintain high standards of hygiene. How possible is that when there is no water? Water is drawn from communal sources and again social distancing in those spaces is unimaginable.

Some woke up as early as 4am and social distancing at the borreholes is not being adhered to. Those who spoke to the Anchor, said unless basic commodities like water are not availed; social distancing and the fight against Coronavirus would remain a dream.

“We don’t have water. We depend on boreholes so we are here to get water,” said Tendai Khumalo a resident of Glenview 8.

Government on Friday announced a total lock-down starting this Monday to try and prevent the spread of Covid 19 which has so far claimed one life of the seven confirmed cases.

The move was commended by even the opposition leaders like Nelson Chamisa but those in the informal sector believe it is harsh and many were not prepared for it.

In the streets of Harare, police officers armed to the teeth were patrolling and ensuring people stayed at home while some were in suburbs like Mbare telling residents to stay indoors as a way of preventing the spread of Covid 19.

The few early morning shoppers encountering the system for the first time shuffled confusedly as staff continually pointed to the markers and asked customers to stand at the right positions.

This is the scene in one supermarket in Harare owned by one of the huge chains in Zimbabwe.

The supermarket has introduced a new system of preventing customers from standing too close to each other.

They have put markings placing their customers roughly one metre apart while standing in queues at till points.

This is all part of the effort to limit the transmission of the Coronavirus (COVID-19) which  is still in its early stages. It’s a system that could work maybe in Europe even though some of the hoarding that occurred in those areas may suggest otherwise.

In Zimbabwe, it remains to be seen how effective the lockdown will be. The country has a number of unique factors.

Firstly, still on the supermarket example, the country faces a problem of subsidized maize meal, a staple diet in Zimbabwe.

During the times that it is available, it is almost impossible to imagine people complying with the positional rule due to the chaos that ensues as people swarm the shop.

The World Health Organisation (WHO) has recommended social distancing as one of the measures to fight the spread of COVID-19.

In the developed world this has resulted in the ‘work from home’ mantra.

How would this even be possible in Zimbabwe? How do you work from home when you earn a daily living from selling tomatoes, vegetables, clothes – both second hand and new?

That would simply mean no work and no work would mean foregoing the daily meal.

Even those who hold jobs that can be done from home they would still need internet connections which the majority cannot afford to install.

WHO recommends self-quarantining which includes advice for people not to share bathrooms, living space and, even, bedrooms.

This is unfathomable thinkable in Zimbabwe.

For some families, at times more than one family, living in one roomed spaces is the norm is places such as Mbare and other high density locations.

Toilets and bathrooms are shared by dozens of people.

The kind of social distancing recommended by WHO is not an option.

Cases of COVID-19 are still comparatively fewer than in regions such as America or Europe.

But as the story of the recently deceased Zororo Makamba and the number of people he came into contact with has shown just one case can easily turn into dozens.

Zororo came from the affluent northern side of Harare.

If another case is to be found on the other side, there is a lot of work that would need to be done to minimise onward transmission.

Committee for allocation of vending sites