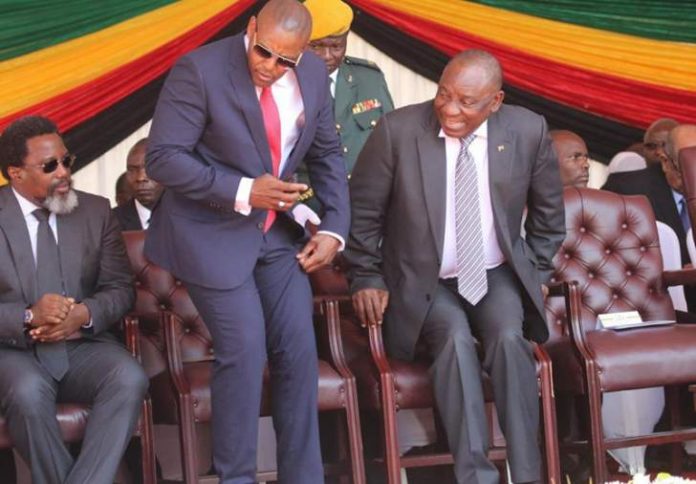 The wealthy businessman said Matanga was misleading Mnangagwa that he was a fugitive from justice as he battles for the control and custody of his minor child with his estranged lover.

In a letter to Mnangagwa dated May 7 this year, the flamboyant businessman said Matanga’s false allegations have damaged his reputation as an international businessman.

He said he had communicated many times with the top cop but with no response.

Buyanga is not happy with Matanga’s conduct in his dispute with former girlfriend Chantelle Muteswa over custody of their son accusing the commissioner-general of siding with the ex-lover.

Matanga recently stated in his affidavit at the High Court that Buyanga is a fugitive from the law saying police failed to locate him when court officials wanted to enforce a court order.

“Your Excellency, I am a man of integrity who cannot afford to be a fugitive especially over an issue involving my son. I believe my son deserves the best while I live, whether with me or his mother and I am doing the best I can for him,” reads part of the letter.

Last month, Buyanga was ordered by Justice Jacob Manzunzu to return the child to his mother within 24 hours and the businessman immediately appealed.

At the hearing, Matanga claimed that police had already engaged Interpol to help locate the child and his father.

“The investigations are still continuing and are at an advanced stage. Interpol has been invoked to assist in locating both the Applicant and minor child outside this jurisdiction. It will be an affront for this Honorable Court to entertain a fugitive from justice like the Applicant,” Matanga said in the affidavit.

Buyanga told Mnangagwa that while his complaints against Matanga were being ignored, the Commissioner General was finding time and energy to respond to Muteswa’s complaints.

“Those utterances (by Matanga) have spiralled in the public domain, with The Herald carrying such a story on the 1st of May 2020 and various other publications following suit.

“Your Excellency, as an affected citizen, I hereby formally register my displeasure at Mr Matanga’s behaviour with an utter disregard for the rule of law.

“As I have said in the past decade in various communications, there is very little chance that Zimbabwe will see meaningful development if there is no effort to enforce the rule of law.”

In the letter, Buyanga reminds Mnangagwa that he had already even written to the Zimbabwe Anti-Corruption Commission and the Judicial Services Commission to report wrongdoing by police in dealing with his case.

Buyanga has in the past sensationally accused Justice Manzunzu of being corruptly compromised by members of the First Family, in particular Mnangagwa’s son Collins whom he says is compromising the judiciary on Muteswa’s side.

The businessman also told Mnangagwa that he was not happy with the treatment he was receiving and accused government officials of not even acknowledging the contributions he had made in the fight against the coronavirus pandemic.