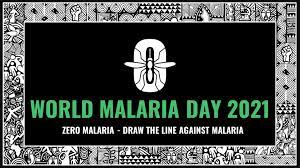 The day was celebrated under the theme ” Zero Malaria , Draw the Line Against Malaria” because every malaria case is preventable, and every malaria death is unacceptable.

This comes as the World Health Organisation launched an initiative which aims to halt transmission of the disease in 25 more countries by 2025.

“Many of the countries we are recognizing today carried, at one time, a very high burden of malaria. Their successes were hard-won and came only after decades of concerted action” said Dr Tedros Adhanom Ghebreyesus, WHO Director-General. “Together, they have shown the world that malaria elimination is a viable goal for all countries.”

WHO African region believes that eliminating all the cases of Malaria in Africa is possible.

WHO Zimbabwe celebrating the world Malaria day tweeted: “The WHO African Region is home to 94% of all malaria cases and death. The more we invest in vaccines for preventable diseases the closer we get to saving the lives of the most vulnerable.”

Malaria is curable but most victims die because they stay far from medical centers and some do not have access to malaria  pills in Africa. “No one should die because they cannot access life serving service to prevent ,detect and treat the disease.

Reaching zero malaria is possible together we can.” WHO Zimbabwe continued in a tweet.

African region lost an estimated of 384,000 population to Malaria. اليانصيب

WHO Regional Director for Africa Dr Matshidiso Moeti in his 2021 message for World Malaria day said,

In 2019, the WHO African Region accounted for 94% of both the 229 million malaria cases and 409,000 malaria deaths reported globally. This is despite the great progress made in malaria response in the Region.”

“Cabo Verde has maintained zero malaria status since 2018, Algeria was certified malaria free in 2019, and Botswana, Ethiopia, the Gambia, Ghana, Namibia and South Africa achieved the 2020 milestones of reducing malaria incidence and deaths by 40% compared to 2015.”

However, 36 of the 44 malaria-endemic countries in the region did not achieve these milestones. Overall, the Region was off track by 37% and 25% for the incidence and deaths milestones respectively.

While malaria incidence in the region dropped by 9% to 10% every five years between 2000 and 2015, in the last five years, this has slowed to less than 2%,” added WHO Regional Director for Africa. ازاي تكسب فلوس من النت

Dr Matshidiso Moeti commented that; “Malaria is responsible for an average annual reduction of 1.3% in Africa’s economic growth. Malaria-related absenteeism and productivity losses cost Nigeria, for example, an estimated US$ 1.1 billion every year.”

In 2003, malaria cost Uganda an estimated gross domestic product equivalent to US$ 11 million. In Kenya, approximately 170 million working days and 11% of primary school days are lost to malaria each year.”

“As WHO, we are working with countries to look strategically at the stagnated progress in the past five “years. We are asking stakeholders in each endemic country to come together and answer the questions: “what is working? what is not working? and what can be done differently to attain the 2030 targets?

Together, we need to move from the perception of malaria as a health problem, to understanding this disease as a threat to socio-economic development that requires a multi-sectoral response.

With an all-of-society response to draw the line against malaria, together, we can ensure African societies, economies and individuals, prosper. كره اونلاين ” Director of Who Africa region highlighted.

World Malaria Day is an occasion to highlight the need for continued investment and sustained political commitment for malaria prevention and control.