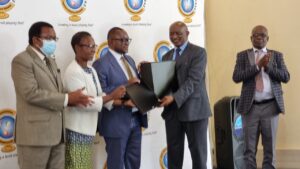 The Zimbabwean Government has made moves to go paperless following the donation of 160 laptops by the Postal Telecommunications Regulatory Authority of Zimbabwe, which will improve inspections and dispute resolutions among other functions

The donation was made to the Ministry of Public Service, Labour, and Social Welfare this week as a move to gear up e-Government programs which will see the government providing online services to its citizens which is aligning to the digital age that the world is moving in.

This system is set to eliminate ghost workers if they exist in government departments.

Speaking at the handover ceremony, Potraz director general, Dr. Gift Machengete said as the regulator they have heeded a request from the Ministry of Public Service, Labour and Social Welfare for computers to assist in the Ministry’s transition from manual to electronic systems, as they move with the times.

“As the nerve centre of government, the Ministry of Public Service will deploy the computers to their Electronic case management system, Labour market information system, Registration, and placement system and for the creation of an electronic retrench database. The computers, I am informed, will also be used to improve on inspections and dispute resolution among other functions by the Ministry,”

Apart from the Ministry of Public Service, the Authority has also donated computers and connectivity to the Zimbabwe Republic Police as part of the e-government program.

“In the short to long term, we envision to see citizens accessing government services from Community Information Centres (CICs)”

“Our vision is to bring convenience to the people while decongesting government offices. We would like to see people applying for passports, birth and death certificates, and other national documents from CICs. For this to succeed, the whole of government should be online and should have reliable ICT systems to support this.”

The handover ceremony was graced by the minister of ICT Jenfan Muswere who applauded Potraz’s works for complimenting government programs which are being run under the National Development Strategy 1 (NDS1).

As Zimbabwe’s Workers Fight for Justice, It’s Time for a Fundamental...

ZSE adds Odd Lot Board on its e-trading platform