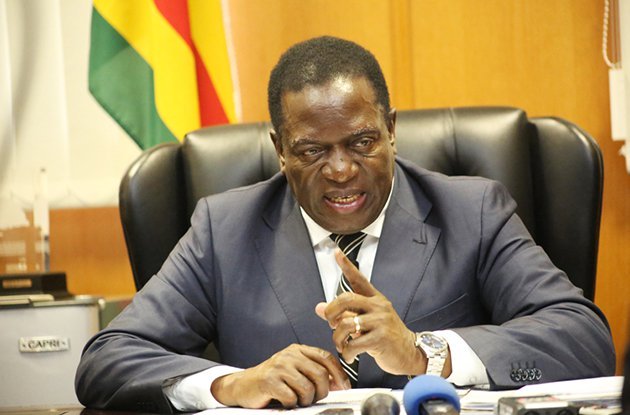 President Mnangagwa has reiterated that Zimbabwe’s land reform programme, estimated to have benefited 300 000 Zimbabweans, was irreversible, a direct reaction to queries raised by a recent government announcement that former local land owners and those protected by treaties and agreements would be compensated or given alternative land for their activities.

Addressing the Political Actors Dialogue at State House on Friday morning, President Mnangagwa said the compensation for developments on farms and other processes was a constitutional obligation.

Lands, Agriculture, Water and Rural Resettlement minister Anxious Masuka and his Finance and Economic Development counterpart Mthuli Ncube announced, earlier this week, that indigenous former farm owners or citizens from countries that ratified Bilateral Investment Protection and Promotion Agreements or Bilateral Investment Treats would be compensated for both land and improvements on their farms.

However, farmers to be compensated in this category would not benefit from the Global Compensation Agreement signed between the former farm owners and government in July this year with the farmers having their rights to a particular piece of land being restored or getting another farm or, alternatively, being paid for the acquired land.

Mnangagwa said: “Let me restate that the Land Reform Programme is irreversible. To this there is no vacillation. The current process with regards to land issues entail the implementation of provisions of our National Constitution, in part Section 295 as it relates to black indigenous Zimbabweans.”

Compensation to former land owners received mixed reactions from within the country and abroad with radical political elements accusing the government of trying to reverse the land reform programme.

However, economists have attacked the government’s rhetoric on land ownership arguing that the continued declaration that land belonged to the State means investors and financial institutions would remain skeptical to fund agricultural activities or issue loans to farmers.

Economist John Robertson argued that there was a need for farmers to have title to the land so that they use the farms as collateral when applying for loans to fund their activities although this was impossible with all land belonging to the state.

“Only if we really collateralize…You might have heard statements that we are never going back on the land reform, what they are saying is that, basically, the government was going to be the owner of the land,” he said adding that when government owns the land there is much more limited things that one can do on that land.

“If that continues the land, itself, is disabled and the farmers on that land are disabled. The country remains dependent on imports therefore it will not economically recover as it should because the collateral value of the land is many, many billions of dollars and this becomes available to farmers as credit.”

Robertson further argued that Zimbabwean farmers cannot get credit from financial institutions despite government assurances that there would be funding while farmers are turned away at the banks.

Government has, however, resolved to re-model, re-configure and recapitalise the Agribank as a dedicated land bank putting the financial institution at the centre of reviving agricultural production in Zimbabwe.

Cabinet approved a proposed re-modelling of the Agribank to establish a vibrant and diversified rural financial services which are underwritten by a Land Bank or its equivalent to help smallholder farmers comprising Communal, Old Resettlement, Small-Scale Commercial and A1 farmers who constitute 99 percent of the farming population while holding up to 95 percent of the productive land and owning over 90 percent of the national livestock herd.

The Agribank, as a dedicated land bank, would deliver a number of specific outputs including strengthening and diversifying existing agricultural and rural financial services for sustainable agrarian reform for accelerated development while providing investment support for A1, A2 and small scale commercial farmers who have not been supported by commercial banks.

It would link currently under-utilized land to structured markets and established value chains supplying factories, supermarkets and export markets while providing working capital for the construction of agricultural infrastructure as well as for value addition and beneficiation enterprises.

Zimbabwe’s agricultural sector is critical in providing livelihoods to approximately 70 percent of the population and contributing between 15 percent and 20 percent of GDP.