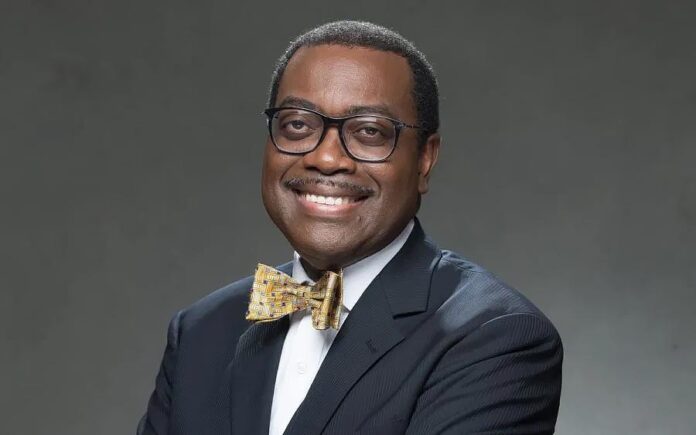 The African Development Bank president Dr Akinwumi A. Adesina, recently re-elected to lead the bank for another five years on an overwhelming 100 percent, has pledged to assist governments across the continent grow paying attention to health, climate and the environment.

Dr Adesina received overwhelming support from the AfDB’s stakeholders in an unprecedented 100 percent support shown to a returning president in the bank’s history.

The former Nigerian agriculture minister was re-elected on the background of leading the AfDB for African development through the Bank’s High 5s – Light-up and Power Africa; Feed Africa; Industrialize Africa; Integrate Africa; and Improve the Quality of Life of the people of Africa.

“The High 5s have taken hold on the continent and become the keys for accelerating Africa’s development. The UNDP has shown that achieving the High 5s would lead to achievement of 90 percent of the SDGs and the Agenda 2063 of the African Union,” he said in his inauguration speech during a virtual ceremony held at the Bank’s headquarters in Abidjan, Cote d’Ivoire.

“Through the innovative and ground-breaking Africa Investment Forum in 2018 and 2019, we were able to attract a combined $78.8 billion worth of investment interests into Africa.

“In every country, the Bank’s impacts are felt. We expanded our presence to 44 countries, including across fragile states. Our staff risk their lives to deliver.”

The Bank, according to Dr Adesina, has launched a Gender Equality Trust to advance gender markers for its projects while the implementation of the Affirmative Finance Action for Women (AFAWA) would leverage US$3b and women businesses.

He said, going forward, the Bank will pay increased attention to supporting Africa with quality health care infrastructure, and building on its comparative advantage in infrastructure.

“COVID-19 opens up new opportunities and a greater sense of urgency to build up Africa’ s manufacturing capacity, industrial development, and critically needed industrial value chains, that must be supported by enabling infrastructure and policies,” he said.

Dr Adesina said special attention would be given to regional industrial value chains and the strengthening of financial markets to expand intra-regional trade and competitiveness, and boost the Africa Continental Free Trade Area.

In ensuring Africa’s youth potential is fully unleashed, Dr Adesina said the AfDB would support the establishment of Youth Entrepreneurship Investment Banks to help to mobilize and deploy capital to drive the entrepreneurship of the youth of Africa.

“The shadows of youth unemployment and migration out of Africa must give way to a glowing light of successful youth-driven businesses across Africa. Africa’s youth must stay in Africa, develop Africa, and project Africa’s future,” he said.

He said the Bank would also scale up technologies to reach tens of millions of farmers and supporting Africa to build competitive agricultural value chains.

“We will add value to what we produce in Africa, and provide creative and high-tech opportunities for massive youth engagement in agriculture and agribusiness,” he said.

“So, our focus will be on ‘Institution’, ‘People’, ‘Delivery’, and ‘Sustainability.’ Each of these are encapsulated in the following five areas which combine with the programmatic High 5s to transform the development landscape of Africa.”