HARARE – Net exchange losses amounting to $1.29 billion resulting from a build up of foreign currency obligations saw Econet Wireless Zimbabwe report a loss in the six months to August 31, 2019.

The group reported a loss of 8. ivermectin dosage for roundworms in dogs 24 million from a profit of 3. quanox para los piojos 55 million last year. The group no doubt faced a myriad of challenges in an environment where hyperinflation had affected customers negatively as purchasing power declined. Consequently this had affected the viability of the business.

According to the group, it has not been able to sufficiently reinvest to maintain its existing telecoms infrastructure and this will inevitably result in a deterioration in service quality if it continues. The group has since engaged POTRAZ and government over the continued under investment.

“The company appreciates the support of our main equipment suppliers: ZTE of China and Ericsson of Sweden, who have provided exceptional support to allow the company to continue to run its platforms without security of payment,” group chairman James Myers said in a statement accompanying the results this morning. The support has been necessary to ensure that near normal operations are sustained. “This has unfortunately resulted in a build-up of foreign currency obligations that require settlement. The resultant exchange losses have negatively impacted the performance of the company,” Myers added.

In the inflation adjusted results, revenue for the group increased by 45% to ZW$1.3 billion from ZWL$866.5 million in the same period last year. The Earnings before Interest Taxation, Depreciation and Amortisation (EBITDA) margin was 42%. In light of the deteriorating economic environment, the group implemented appropriate cost efficiency strategies.

The investment in Liquid Telecommunications Holdings Limited of US$135 million, at the time of the transaction, has been accounted for as an investment and a fair value adjustment of ZW$1.1 billion of this investment has been processed through the Statement of Other Comprehensive Income.

The company did not declare a dividend. 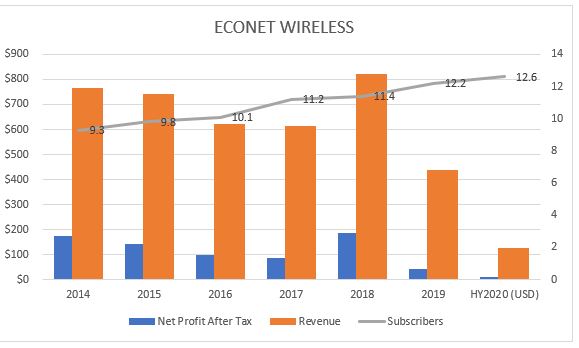 Our Thoughts on Econet Wireless Zimbabwe

Operationally, the group is clearly feeling the pinch from the current economic environment. An adjustment to the statement of income figures for the exchange rate at the end of the group’s interim period illustrates the impact. The unbundling of the operations now housed under Cassava Smartech limits the scope for growth in the Econet Wireless group. Of what is left of the Econet Wireless group, the Distribution Power Africa unit is evidently the group’s big gamble for growth. Green energy is undoubtedly the future, but the groups own assessment of the subsidiary’s foreign currency needs is a concern. Considering the group’s failure to overcome foreign currency challenges with its KweseTV project, it is difficult to be optimistic about the prospects for DPA. Beyond that, the fact that the liberalization of the local energy remains a “work in progress” further limits the prospects of any meaningful external growth for the operating segment.

For its core business in cellular network services, the group experienced its fastest growth in subscribers in the years immediately following dollarization. Now, the country looks set for a prolonged spell of depressed economic growth and activity. Indeed, a look through the revenue performance of the cellular network shows fairly subdued growth since 2016. Admittedly, the significant interest of local authorities to maintain network tariffs at an affordable level may be factor, among other government interventions in the sector.

The effects of the current environment go beyond just constraining the consumer market for the group’s services, there also the inevitable operational challenges that will arise from the inflation impact on earnings as well as the effect of the fuel and energy shortages on operating costs. Perhaps this explains the big emphasis on possible long term benefits regarding cost management. The conclusion is that having exhausted external growth opportunities in its flagship operations, the group is now banking on improved operating efficiencies as an avenue for growth.

The group’s inconsistent margins over the year’s suggest a definite need for more protection against the adverse effects of economic shocks on its operations. During the comparatively more stable period between 2010-2014 the groups top line margins generally improved year on year, with the EBITDA margin averaging 32%, Operating margin averaging 26% while the NOPAT margin was slightly more inconsistent during but averaged 16%. Moving into the 2015-2017 when the liquidity shortages started, average margins declined across the board with the EBITDA margin at 30%, operating profit margin at 14% and NOPAT margin at 6%.

A look at the average basic earnings for the past nine years shows diminishing internal returns for shareholders, since the group has increasingly leaned on equity financing for its expansion projects. Evidently, the projects did not quite take off, or at least were not on the books for long enough to see them make a real impact on the group’s earnings. Perhaps the rush to unbundle the Cassava Smartech operations was out of a desire to expedite the returns for shareholders from the growing businesses. how long does ivermectin last in body

“The world has the resources to end hunger”