Secretary of State for Provincial Affairs and Devolution Mr Tafadzwa Muguti has rubbished the claim that his office is issuing out vending tables at Mupedzanhamo Flee market the rumours of vending space allocation started to circulate after the visit to Mupedzanhamo by various government officials, City of Harare official and various security departments earlier this week.

“The Office of the Minister of State is not involved in the allocation of tables and registration of potential traders as alluded by some misguided persons. Ultimately the decision of how Mupedzanhamo shall operate rests with Cabinet through a whole of Government approach which includes the property owners, the City of Harare,” said Mr Muguti

“Unfortunately unscrupulous and disgruntled people have already started spreading fake news on the government’s position in regard to the reopening of Mupedzanhamo. This includes mischievously spreading falsehoods on social media about the reopening protocols. We are used to such wayward behaviour by people who assume Government and City of Harare responsibilities without the legal standing nor the technical expertise,”

“We are also aware that others have already started collecting names of potential traders purporting to have such authority from their political parties and associations. No lists will be entertained, we plan to have each interested trader paying directly to authorities and registering on their own through the laid down whole of government protocols which will be announced soon,” he added.

The City of Harare which owns the market has been tasked with all the renovations whilst the Government through the Small Medium Enterprises Development Corporation (SMEDCO), a wholly owned Government parastatal under the Ministry of Women Affairs, Small Medium Enterprises and Cooperative Development, is exploring together with all stakeholders how best to effectively allocate tables, register and license all traders in Mupedzanhamo.

The government is seized with this matter at the highest level and the respective Ministries have begun planning for the upgrade, renovations and construction of more markets for  traders 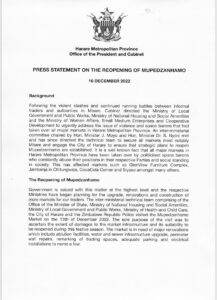 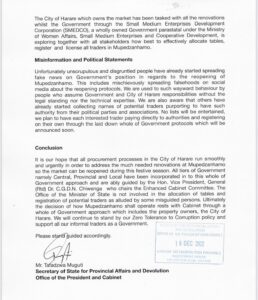 Cyril Ramaphosa Re-elected As leader of ANC in South Africa

Gold exports up 3% in 4months to April

The gathering crisis in Mozambique