Depreciation in value of the local currency against the US dollar and huge foreign travel delegations in the 11 months period saw the latter surpassing the budgeted Z$43 million by two-fold to a whooping Z$150 million.

In the same vein, employment costs exceeded actual budget of Z$4.1 billion by 31.7% to Z$5.4 billion due to the awarding of cost of living adjustment (COLA) by the government to its workers.

However, on capital expenditure, government used less money at Z$1.4 billion against a budget of Z$1.8 billion.

Foreign debt interest budget stood at Z1 million although the government only paid Z million, only as token payments. where to get ivermectin in singapore On domestic debt the government paid interest to the tune of Z$271 million against a budget of Z$302 million after negotiating for rollovers. 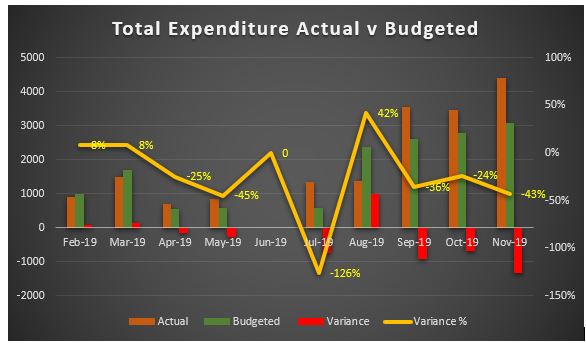 Monthly total expenditure during the 11 months started on a steady note with surpluses in the first two months. why am i still getting new scabies bumps the day after treatment with permethrin and ivermectin A variance of +8% was recorded as Treasury spent less than budgeted due to less fulfilment of debt obligations in the first three months.

April costs began to rise as inflation came into play and the introduction of the said employee salary cushions which were not budgeted for. As the year went on Treasury began to increase costs as prices rose monthly which might explain why they went against capital expenditure in a hyperinflationary environment.

On another note part of the deficit was due to unbudgeted for expenditures like the El-Nino induced drought which characterised the 2018/19 cropping season resulting in crop failure, livestock and wildlife deaths.

Emirates special fares reconnect Zimbabwe to the world in 2021