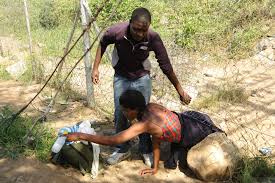 AS soon as Isabella Mhere saw her Zimbabwe Schools Examination Council Advanced Level results early this year, she knew exactly what she was going to do.

With seven points from three arts subjects to her name she crossed the border into South Africa to look for work.

The idea being to earn enough money to further her studies.

Isabella went to live with her aunt but without the requisite permits the kind of jobs she had in mind were difficult to come by.

She ended up getting a job as a housemaid.

Isabella is in Zimbabwe for the Festive Season but declares that she will not go back to South Africa although she remains ambitious.

“The exposure was good and life is also more affordable that side but home is best,” she says.

The 19-year old’s story is a much better one.

South Africa is the most popular choice for Zimbabweans seeking a better life but it has tales of horror of its own most notably the high incidences of xenophobic violence.

Some have come back in body bags and coffins, others maimed physically and or mentally.

Others have left Zimbabwe in search of better lives in lands further afield and have also not been as fortunate as Isabella.

They tell heart rending tales of abuse in countries which some of them hadn’t even heard of before they went there.

Made promises of mouth-watering salaries, some as much as US$2000 per month, the decision to migrate wasn’t too hard for them.

But they brought back tales of unspeakable abuse.

One of the most notable cases involved a number of women who found themselves in Kuwait where they had been promised well-paying jobs only to discover that they had fallen into the hands of human traffickers.

Zimbabwe faces unique migration challenges which it hadn’t faced in its first twenty years of existence.

Emigration in the country is fuelled by almost two decades of economic decline and political instability.

Some estimates put unemployment figures in the country at as high as 95 percent.

This has created a huge pool of desperate people who have ended up being manipulated by human traffickers.

And the authorities have been found wanting each time there have been reports of citizens falling into vulnerable situations in foreign countries.

There have been stories of Zimbabweans used as drug mules knowingly and unknowingly.

They have been caught and jailed in foreign and strange lands.

Assessing trafficking in Zimbabwe and southern Africa, in general, is more difficult than tracking emigration, because trafficking networks are well hidden.

Zimbabwe is a source, transit and destination country for men, women and children subjected to sex trafficking and forced labour.

Locally there have also been serious shortcomings from the authorities when citizens fall prey to natural disasters.

In March, the country was hit by one of the strongest storms on record, Cyclone Idai, which rendered hundreds of thousands of people in Chimanimani and Chipinge, among other areas, destitute and homeless in a space of a few hours.

These are all tales that have haunted Zimbabwe over the past few years and have exposed government’s incapacity to deal with the movement of its citizens, forced and unforced.

Since 2016, government has, however, come up with responses to deal with trafficking.

It investigated 72 potential cases of trafficking and prosecuted 42 cases in 2016, compared to none in the previous year.

Also in 2016, government repatriated 140 Zimbabwean women who were trafficked to Kuwait.

The NRM seeks to assist first line officials and other stakeholders to provide services that ensure that migrants’ protection needs are recognised and addressed in situations of mixed migration flows.

“The department undertakes to administer, coordinate and monitor the effective and efficient delivery of migrant protection interventions,” Public Service, Labour and Social Welfare secretary, Simon Masanga, said at the launch of the document.

Love Justice Zimbabwe national project manager Gerald Nondo believes the new document will help in the assistance of vulnerable people by clearly spelling out the role of different stakeholders particularly in government departments who are involved in the various cases involving migrants.

“It will spell out what the different stakeholders have to do when we deal with a case.

“It is going to give us the guidelines and it will be a mechanism for us to monitor the progress of our cases because we know what we are expecting from each stakeholder in the referral mechanism.

Governments’ response mechanism to different cases such as the one involving the women trafficked to Kuwait has in the past been marked by uncoordinated reactions because of lack of clearly demarcated roles.

Government says the NRM seeks to strengthen first line officials’ awareness of national, regional and international legal instruments for the protection of migrants, both regular and irregular, in need of protection assistance.

Unki platinum production up 13% in Q1