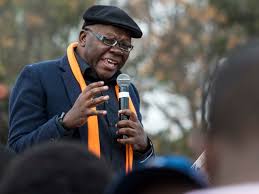 “A very cruel budget when you consider the increase in VAT to 15%, but I think the fundamental problem is that with inflation of 268% and the fact that most government revenues are now pegged in US dollars, this budget to be meaningful, ought to have been indexed in US dollars.

“In our view, he should simply have announced a US$4 billion budget. If you look at the figures, it is a $4.2 trillion budget, which translates to US$4 billion at an exchange rate of the used USD1 to ZW$1000,”

“We find it a very anti-people budget premised on very faulty assumptions that the country will have a good rainfall season and solid international commodity prices; his assumption is that we will have power (electricity) next year, which is all wrong assumptions and faulty,” added Hon Biti

“We already know the challenges of power, the global challenge that almost all economies are in shrinkage. It’s a pipe dream. In simple terms, this should have been a budget in USDs, he should have dollarised the budget, and he should have floated ZW$. Ncube should have reduced the interest rate from 200% to 20%,” Biti said.