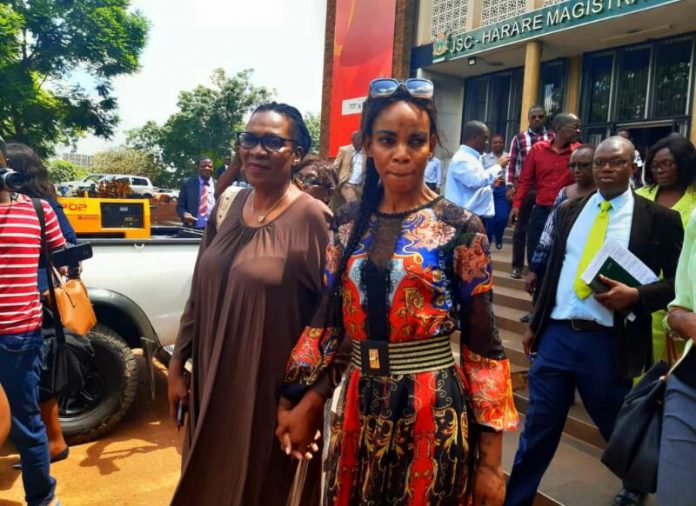 Munyaradzi Doma
Marry Mubaiwa, wife to Vice President Chiwenga who is facing six counts of externalisation, five counts of money laundering, one count of fraud and attempted murder has been granted ZW$50 000 bail by High Court Judge Pisirayi Kwenda.
As part of her bail conditions, Mubaiwa was ordered to deposit as surety, title deeds to a property owned by her father Keni and she was also ordered to surrender her diplomatic passport.
Mubaiwa was also ordered by the court to report once a fortnight at Borrowdale Police Station on Friday.
Mubaiwa allegedly externalised and laundered more than US$2 million and is said to have committed fraud after she wanted to illegally solemnise her marriage to VP Chiwenga without his consent.
According to the attempted murder charge, Mubaiwa allegedly detained her husband in a South African hotel for 24 hours although he needed emergency medical attention.
It is said Chiwenga’s security team had to forcibly take him to a hospital despite Mubaiwa’s resistance.
Further allegations are that Mubaiwa removed the intravenous giving set and catheter which were administered to the ailing and bedridden Vice President when he was admitted at a South African hospital.
Chiwenga reportedly started bleeding profusely after Mubaiwa removed the life-saving devices.
Mubaiwa allegedly forced Chiwenga off his hospital bed while attempting to take him out of the ward but was foiled by his security aides.
Allegations are that on June 22 this year, Chiwenga was airlifted for a medical emergency in South Africa but Mubaiwa took him to Sheraton Hotel in Pretoria where she kept him for 24 hours.
The state further alleges that the following day, Marry kept on denying Chiwenga medical attention till the security team forcefully took him to Netcare Hospital.
It is said on his admission, Chiwenga had intra-venous giving set as well as a central venous catheter administered on him to sustain his life.
It is also alleged that Chiwenga was transferred to a private ward a few weeks later where he was under 24 hour monitoring by his doctors and security aides.
The court further heard that Chiwenga was helpless and relied on the medical staff and his security.
It is also alleged that on July 8 at around 8pm, Mubaiwa visited the hospital and asked the staff to excuse her on the pretext that she needed some privacy with Chiwenga.
Mubaiwa allegedly removed the intra-venous connections leading to Chiwenga bleeding profusely.
The court further heard that Mubaiwa removed Chiwenga from his hospital bed and attempted to take him out of hospital before his security team stopped her.
Medical staff had to be called to resuscitate Chiwenga while Mubaiwa allegedly disappeared from the hospital.