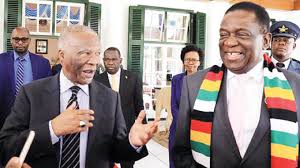 Former South African President Thabo Mbeki held marathon meetings with various political parties for the second day running as part of efforts to bring President Emmerson Mnangagwa and MDC – Alliance to the table for political dialogue, which is meant to set the country on a path to political and economic reforms.
Mbeki who arrived in Zimbabwe on Monday, met Mnangagwa for two hours before engaging MDC-A leader Nelsion Chamisa for a similar amount of time.
On Tuesday (today), Mbeki met Thokozani Khupe of the MDC  together with Lovemore Madhuku and Priscilla Misihairambwi.  He later met church leaders led by Kenneth Mtata.
Late in the afternoon, Mbeki was to meet Mnangagwa again before meeting with Chamisa and Welshman Ncube.
Mbeki and the MDC refused to divulge the details of their meetings, but sources said the former South African leader wants to bring the two leaders on the table so that they could discuss. It is understood that dialogue between the two major parties has been happening although at informal levels.
Sources however say that dialogue might not proceed as Mbeki expects as sharp differences have emerged on the required path to political consensus. Mnangagwa does not want a government of national unity and wants Chamisa to accept that he lost the 2018 elections while the youthful leader wants the Zanu PF leader to accept that the past elections were not free and fair.
“This is a merry go round issue and a show of power. Mnangagwa wants legitimacy while Chamisa wants dialogue based on the idea that the 2018 electiond were stolen,” said a source.
President  Mbeki, played a similar  role a decade ago when he forced the late President Robert Mugabe to form a unity government with Morgan Tsvangirai in 2008.
The coalition government was credited for stabilizing the economy. But since Mnangagwa took over in 2017 the economy has been on a decline with companies closing shop while the democratic space keeps on shrinking.
President Mbeki also met the former first lady Grace Mugabe to understand how she was coping since the death of her husband.
He also met civic leaders and church representatives all in a bid to help Harare get back on its feet.

‘Insurance should be seen as an important part of business’

COVID-19 response must target African agriculture and the rural poor