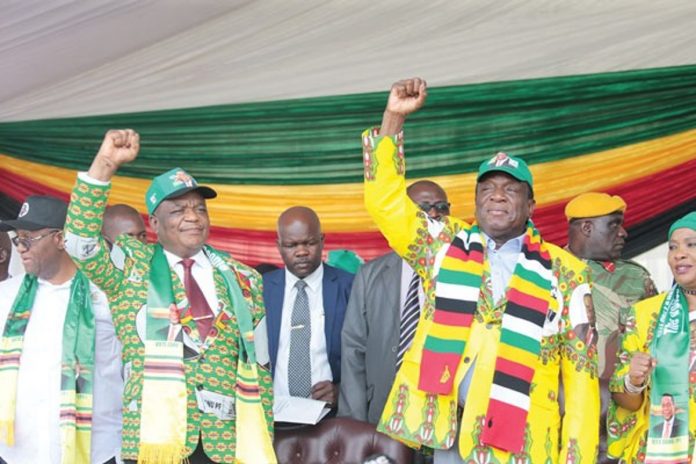 Zimbabweans who continue to struggle through their daily lives while trying to beat the economic challenges they are facing have dismissed the Zanu-PF annual people’s conference, set to begin tomorrow in Goromonzi, Mashonaland East province, as yet another Christmas Party for a few privileged party members.

Though many have been relishing an expected showdown between President Mnangagwa and Vice President Constantino Chiwenga, the perceived factional battles have been well-managed since the latter’s return from China last month.

Chiwenga was in China for four months while receiving treatment amid unconfirmed speculation that he was gunning for his boss’ post on his return.

However, Mnangagwa and Chiwenga have appeared together at every given opportunity to show unity with the top echelons of the ruling party.

The party’s commissariat department has already indicated that the conference will not deal with any positions while their focus would be on strengthening structures.

National secretary for the commissariat Victor Matemadanda said the conference would give the party room to unite while providing solutions to problems being faced across the country.

“I don’t think people understand the purpose of a conference. We are strengthening the party, all provinces are endorsing President ED Mnangagwa as the candidate for 2023 election. What I can say is that everything will go well because we are just an organised party,” he said.

Party administration boss Obert Mpofu said they will be discussing matters that are affecting ordinary Zimbabweans.

“This is just a conference where we will be discussing issues that are affecting people and economy will be on the top of the agenda. The issue of machete wielding people will also be discussed there,” he said.

But most people interviewed said Zanu-PF and its conference would not address the increasing poverty levels, fuel shortages, cash shortages and the ever-rising inflation.

“Every Tuesday cabinet sits every week while the party’s politburo sits every month with quarterly meetings of the central committee but all these have not provided any solutions to our problems,” a vendor in Harare lamented.

Political analyst Eldred Masunungure said there was nothing new coming from the conference and Zimbabweans should brace for a bleak Christmas.

“There is nothing new expect to confirm President Emmerson Mnangagwa as the sole candidate of the party in 2023 election. That is all and Zimbabweans should brace for another bleak festival holidays,” he said.

Masunungure said while the ruling party has budgeted to spend millions of dollars for the conference, the leaders are likely to come up with less ideas on how to solve the crisis Zimbabwe is facing.

Zanu PF politburo seats twice a month and they have been discussing the same issues they are going to discuss at the conference.

Another political commentator Ibbo Mandaza said the conference was not necessary as nothing new was going to come from there.

“It will just be a gathering where people will eat and feast at the expense of suffering Zimbabweans. Already provinces have endorsed President Mnangagwa but they just want to stamp it through a conference.

“My thinking is there are much more pressing issues that need to be dealt with than people gathering and feast,” he said.

The conference is expected to decide on the fate of the  remnants of G40 that are said to be working to destablise the party.