HARARE – The government has signed a US$100 million deal for the construction of a 100-megawatt solar photovoltaic power plant with Evergreen Private Limited, which will see the unlocking of the potential the country has for renewable energy.

The country is in one of the best solar radiation belts in the world, enjoying an average of 325 days of unlimited sunlight per year. Under the agreement, the project is modelled on a build-own-and-transfer model, which the government is eyeing to benefit from by taking transfer of the infrastructure at the end of the concession period.

During the signing ceremony, the director of Evergreen Pvt Limited, Glenn Cohen, said that Zimbabwe  has the largest energy deficit in the region. “We look forward to now getting the ball rolling and we hope to execute it in record time within 2 years,” Cohen said.

The solar plant would be built at Munyati Power Station, on land owned by the Zimbabwe Power Company, a subsidiary of the ZESA holding.

The United Nations (UN) has called for a global goal to achieve universal access to modern energy services by 2030, and the African countries have heard the call as the AfDB is investing $12 billion in renewable energy in Africa. 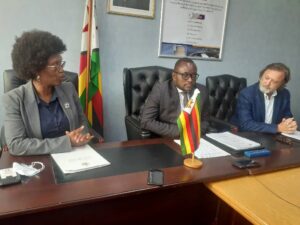