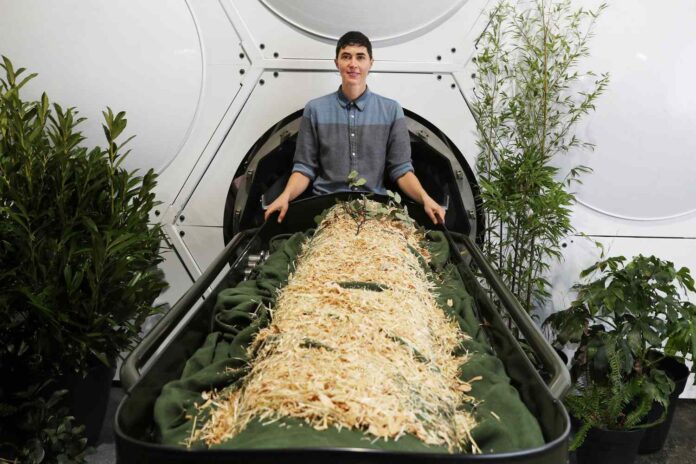 New York has become the latest US state to allow so-called human composting.

A person can now have their body turned into soil after their death – which is seen as an environmentally friendly alternative to a burial or cremation.

Also known as “natural organic reduction”, the practice sees a body decompose over several weeks after being shut in a container.

In 2019, Washington was the first US state to legalise it. Colorado, Oregon, Vermont and California followed suit.

A body is put in a closed vessel along with selected materials such as woodchips, alfalfa and straw grass, and gradually breaks down under the action of microbes.

After a period of around a month – and a heating process to kill off any contagion – loved ones are given the resulting soil. This can be used in planting flowers, vegetables or trees.

One US firm, Recompose, has said its service can save a tonne of carbon compared with a cremation or a traditional burial.

Emissions of carbon dioxide are a major contributor to climate change, because they act to trap the Earth’s heat in a phenomenon known as the greenhouse effect.

Proponents of human composting say it is not only a more environmental option, but also a more practical one in cities where land for cemeteries is limited.

But, for some, there are ethical questions about what happens to the soil which results from the composting.

Catholic bishops in New York state reportedly opposed the legislation, arguing that human bodies should not be treated like “household waste”.

Concerns have also been raised about the cost of composting. But the firm Recompose – whose facility in Seattle is one of the world’s first – says its $7,000 (£5,786) fee is “comparable” with rival options.

Human composting is already legal throughout Sweden. And natural burials – in which a body is buried without a coffin or with a biodegradable coffin – are permitted in the UK.

RBZ says fx trading now makes up 50% of total as ZSE falls for...