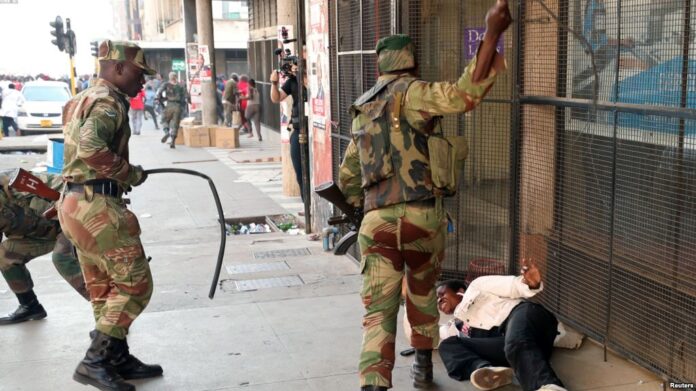 The Zimbabwean government has been rapped for failing to implement the recommendations made by the Motlanthe Commission of Inquiry in the wake of the shootings of August 1, 2018.

The Commission of Inquiry, which was headed by former South African president, Kgalema Motlanthe, was appointed by President Mnangagwa on 12 September 2018, to look into the circumstances surrounding the shooting of innocent civilians during a demonstration held on August 1, the same year.

A report compiled by the Zimbabwe Human Rights Association (Zimrights) analysing government’s progress in implementing the recommendations made by the commission has revealed what it termed substantial non-compliance with commission’s report.

The Zimrights report starts by stating that the investigations should have been carried by the Zimbabwe Human Rights Commission as a constitutionally established independent commission with the mandate to investigate allegations of human rights violations.

“The initiative, regardless of its flaws, raised hopes of victims, families of victims, citizens, and civil society organizations that the atrocities that were faced by civilians were going to be addressed,” Zimrights said.

The human rights lobby group said that despite the criticisms against how the Commission of Inquiry conducted its assignment, some of its recommendations were progressive in ensuring justice, creating conditions for peace, and public trust in public institutions and government.

“However, an analysis of the steps taken by the government to implement the recommendations of the commission reveals substantial non-compliance. A year and a half into the Commission of Inquiry’s findings and recommendations, no justice has been done for the victims, and perpetrators remain at large,” Zimrights pointed out.

“The government has not fulfilled the recommendations. Instead, politicians have sought to use the report more as a public relations document rather than a sincere quest for reform and nation-building.”

Zimrights recommended that it’s important that government seek dialogue first with its citizens and affected families before parading the report to foreign governments.

“Human rights are for the benefit of the people of Zimbabwe. Anything else is secondary. That is true of the Motlanthe report, two years later. Many believe, it was wasted money and time,” Zimrights said.

President Mnangagwa, gave the commission terms of reference which included to inquire into the circumstances leading to 1 August 2018 post-election violence, to identify the actors and their leaders, their motive and strategies employed in the protests and to inquire into the intervention by the Zimbabwe Republic Police in the maintenance of law and order.

The commission was also tasked to Investigate the circumstances that necessitated the military’s involvement in the maintenance of law and order and to consider whether the degree of force used was proportionate to the ensuing threat to public safety, law and order.

It came up with a number of recommendations which included accountability in respect of the alleged perpetrators. This still has not happened.

The agony of Nyaminyami district teachers