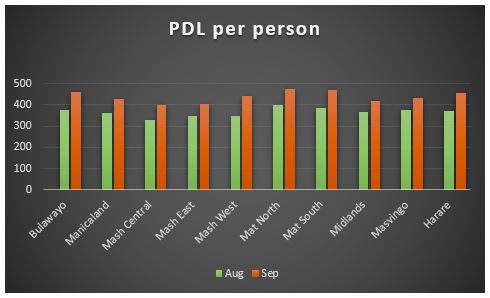 HARARE – Latest data from Zimstat shows that the average Zimbabwean lived on US96 cents a day or ZWL$14.60 in September up 18.18% from ZWL$12.78 or US$1.174 in August. The movement is in line with the September monthly inflation figures of 17.7% but means that Zimbabwe is now in extreme poverty as consumption is now below the World’s Bank standard measure of US$1.90 a day.

According to the World Bank, one in 12 people on the planet still live in extreme poverty, many of them in fragile and conflict-torn places. Sub-Saharan Africa is the only region in the world where the overall number of extremely poor people is increasing rather than decreasing. Globally, rates of extreme poverty — defined as earning less than $1.90 (€1.64) a day —  have dramatically declined, falling from 1.9 billion in 1990 to approximately 736 million. However, an estimated 413 million people in Africa currently live in extreme poverty — more than half of the world’s total.For Zimbabwe in particular, the current economic challenges have cast a long shadow on welfare resulting in a 14% reduction in lifetime earnings in Zimbabwe in 2018.

ILO recommends that the PDL should be used as a benchmark or a reference point in determining minimum wages. Although the recurrent result is that minimum wages and poverty are inversely related, one cannot always conclude that a rise in the minimum wages is the most cost effective way to reduce poverty.

The poverty datum lines vary by province as prices vary from place to place. The TCPL for an average household in September 2019 ranged from $2,007 in Mashonaland Central Province to $2.365.00 in Matabeleland North Province. 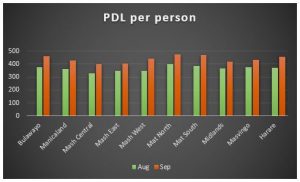 A recent study by Oxfam rated Nigeria as the country that does the least when it comes to tackling poverty,  out of 157 countries. Its social spending (on health, education and social protection) is shamefully low, which is reflected in very poor social outcomes for its citizens. One in 10 children in Nigeria does not reach their fifth birthday, and more than 10 million children do not go to school.  Sixty percent of these are girls. Zimbabwe is ranked 92nd. – FinX

De-dollarisation is possible; but authorities must first have control of domestic...