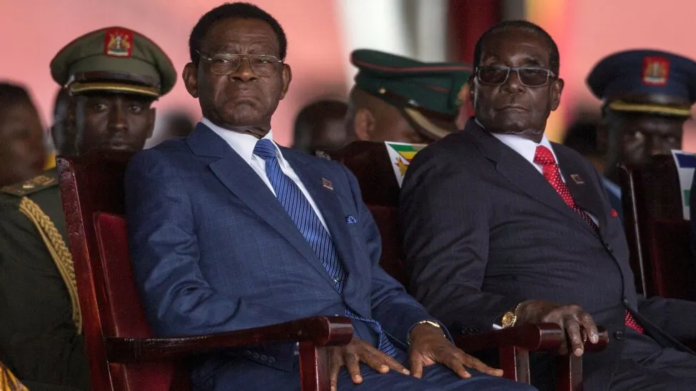 The 80-year-old’s 43 years in power are the longest of any leader alive in the world today, with the exception of monarchs.
He seized power from Francisco Macias Nguema, who in 1968 had become Equatorial Guinea’s first president upon independence from Spain and later declared himself president for life. Macias — Obiang’s uncle — was executed by the firing squad two months after the coup.

Obiang’s opponents say that under his iron-fisted, hermetic tenure, the country has become the “North Korea of Africa”.

In a country where there is just a single authorised opposition party, Obiang exercises near-total political control
In 2016, he was re-elected with 93.7 per cent of the vote: this time, the official result gave him 94.9 per cent, on a turnout of 98 per cent.

Son in the wings

Obiang’s son, Teodoro Nguema Obiang Mangue, known as Teodorin, is widely seen as his successor and has ascended the ranks to the position of vice president today.

In an interview ahead of the 2016 vote, the elder Obiang told the French-language Jeune Afrique magazine that this would be the last time he would run.
“I have been in power for too long, but the people want me to be their president,” he said.

Asked whether Teodorin was being groomed for power, he said: “Equatorial Guinea isn’t a monarchy… but if he’s got talent, there’s nothing I can do.”

Speculation that he would hand over the reins in the upcoming vote gained pace as his public appearances became rarer.

But those expectations were quashed after Teodorin was enveloped in scandals abroad and a conviction in France for ill-gotten gains — state assets acquired illegally.

France, Britain and the United States have ordered him to forfeit millions of dollars in assets, from mansions to luxury cars, while France also handed him a three-year suspended sentence and a fine of 30 million euros.

The storm, coinciding with a downturn in oil revenue and the economic blow inflicted by Covid, may have prompted the elder Obiang’s inner circle to advise against leadership change.

The PDGE unanimously chose Obiang as its candidate “because of his charisma, his leadership and his political experience”, Teodorin wrote on Twitter. The party’s election slogan, seen universally on posters and state TV, was “continuity”.

Obiang graduated from military school while the country, Spanish Guinea, was still under the rule of Spain’s fascist dictator, General Francisco Franco.

He then held a string of key jobs, including head of the notorious Black Beach prison — a place of “living hell”, in the words of Amnesty International.

His violent path to power has bequeathed a deep fear of coups.

His bodyguard comprises soldiers who are members of his clan, but — for additional security — he has a close-protection unit who are reputedly Israelis. Zimbabweans and Ugandans have also been brought in to help guard the presidential palace.

Obiang says he has foiled at least 10 attempted coups and assassinations during his long spell in power, often blaming dissidents living in exile or “foreign powers”.

The authorities closed the borders ahead of the elections to thwart suspected plotters.

Obiang has been buttressed by the discovery of oil in territorial waters in mid-1996.

The bonanza has turned Equatorial Guinea into sub-Saharan Africa’s third-richest country, in terms of per capita income.

But the wealth is very unequally distributed — four-fifths of the population of 1.4 million live below the poverty threshold according to World Bank figures for 2006, the latest available.

The country has a long-established reputation internationally for graft, ranking 172 out of 180 nations on Transparency International’s 2021 Corruption Perceptions Index.

Bridging the gap between rich and poor: A strong middle class...