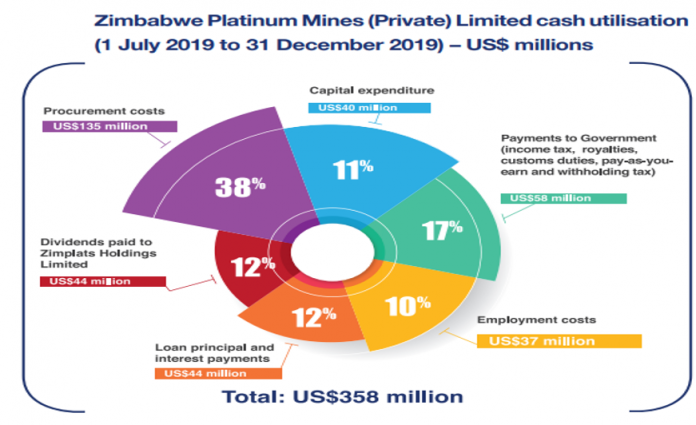 HARARE – Zimplats, the country’s largest platinum miner, says its revenue for the half year ended December 31, 2019 rose 29% to US$377.7 million from the comparative period backed by increase in average metal prices.

The miner is one of Zimbabwe’s three platinum producers, along with Unki and Mimosa Mine. The southern African nation, is home to the world’s second biggest known platinum deposits after South Africa.

The government is expected to unveil a platinum policy that will provide the framework for developing the sector.

Gross revenue per six metals (6E) ounce surged by 47% to US$1 494 from US$1 018 in the comparative period. The miner generated US$83.8 million from operating activities.

Cost of sales at US$240.6 million was 7% higher than the same period last year’s US$225.2 million mainly due to increase in depreciation, royalties and share based payments.

“The increase in depreciation was a result of the higher asset base and a review of estimated useful lives of assets,” the miner stated in its latest report. Gross profit margin increased to 36% from 23%.

Due to higher corporate social responsibility costs, administrative expenses was up 12% to US$3.7 million from the restated amount of US$3.3 million previously. In the same vein, foreign exchange losses were higher than the previous year due to significant depreciation of the Zimbabwean dollar against the US Dollar.

Other income declined from US$39.2 million in prior period to US$300 000. Previously, Zimplats benefited from export incentive of US$29.4 million from the apex bank and a US$9.6 million refund due from ZIMRA following a court ruling in favor of the operating subsidiary.

Cash operating cost per 6E ounce produced went up 6% to US$641 from US$607. This was attributed to a 7% reduction in 6E production and rise in selling expenses due to higher volume of concentrate sales during the smelter shutdown.

Finance costs at US$1.3 million were below the prior period owing to capitalised borrowing costs for the current period and a repayment of part of the Standard Bank of South Africa revolving credit facility (SBSA RCF) in the prior financial year with final installment on the SBSA RCF made in December 2019.

Zimplats spent US$90 million on redevelopment of Bimha Mine had been against a project budget of US$101 million. But, it is progressing well.

“Installation of the south underground crusher and the ore-conveyancing system were completed during the half year. The focus is now on completing the two underground workshops,” it said.

On the same note, the miner spent US$79.4 million on development of Mupani Mine against an approved project budget of US$264 million. Mupani mine targets full production in August 2025.

“The development of Mupani Mine (the replacement for Ngwarati and Rukodzi mines) is ahead of schedule and the mine is scheduled to receive the first fleet from Rukodzi Mine in the second half of the financial year. Focus is currently on establishing the surface crushing infrastructure to treat current ore production for feed to the concentrators,” Zimplats stated.

6E production decreased by 7% to 267 366 ounces from 289 010 ounces due to unfavorable furnace inventory movement on start-up (first fill) following the furnace rebuild shutdown.

Six lost-time accidents were recorded during the half year resulting in a lost-time injury frequency rate of 1.26 against 0.26 for the same period last year.

In the outlook, the company is optimistic with the resurgence of prices of some commodities on the world market to offset the challenging operating environment.