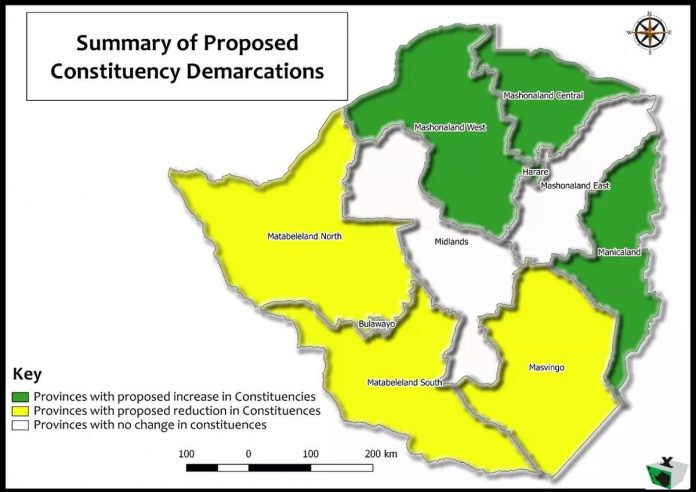 Election watchdog, Zimbabwe Election Support Network’s proposal to realign the number of constituencies in accordance with the population in each province could see the opposition getting more representatives in Parliament.

At the moment, the MDC controls Bulawayo and Harare and has significant support in Mashonaland West as well as Manicaland where an increase of one constituencies is being proposed from the current 26.

Zanu PF enjoys dominance in Masvingo, Mashonaland Central and Mashonaland East. It tussles for control with the opposition in Matebeleland provinces.

In Harare, with 899 333 registered voters, ZESN proposes an increase in constituencies by 4 from the current 29 to 33.

Mashonaland Central and Mashonaland West provinces, all Zanu PF fortress, are proposed to have an increase in representation by two constituencies apiece while the two Matabeleland Provinces should drop the number of constituencies by one each.

The election lobby group suggests that Masvingo should reduce the number of constituencies by three from the current 26 to 23 while Mashonaland East and Midlands should remain unchanged at 23 and 28, respectively.

The proposal will be used together with outcomes of the consultative process that are set to be undertaken by the Zimbabwe Electoral Commission in coming up with boundaries for the 2023 elections.

According to the MDC secretary for elections Jacob Mafume, this was only a proposal from ZESN and as a party, they would make their own representations to the electoral body.

“At the appropriate time, we shall make our views known,” he said.